This article is a stub. You can help Grim Dawn Wiki by expanding it.

The Crucible is a Downloadable Content (DLC) that introduces a challenging new arena gameplay mode to Grim Dawn.

The Crucible was conceived as a stretch goal during Crate's successful Kickstarter campaign. Originally called Survival Mode, it was described as follows: “In survival mode players will fight to stay alive against increasingly difficult waves of monsters.” The DLC was made available for free to those who purchased the game  prior to or during the Kickstarter campaign.

The Crucible features three difficulty modes for the player to test their characters: Aspirant, Challenger and Gladiator. Defeating the first 100 waves of enemies of a difficulty will unlock the next. Each difficulty presents tougher challenges, but also greater rewards.

The Crucible features several randomized battlegrounds, each with different layouts and defensive positions. 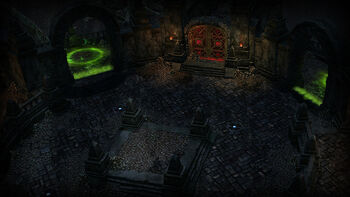 Crucible of the Dead 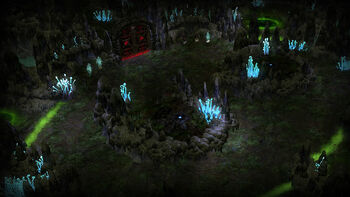 Crucible of the Deeps 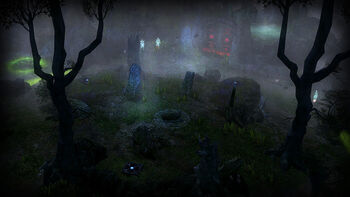 Crucible of the Grove 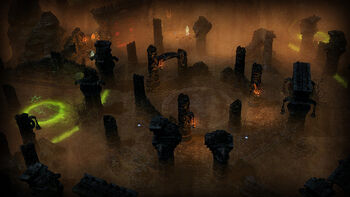 Crucible of the Sands
Add a photo to this gallery

In the Crucible, death marks the end (especially true for Hardcore players). Every 10 waves of enemies, the player has the choice of continuing on for the next 10 encounters for a chance of greater reward, or cash out what you’ve earned and not risk your own demise.

Should you perish, you cannot continue further in the Crucible. In Multiplayer, you still have a chance if your allies survive. Should they manage to finish the wave that bested you, you will be resurrected (for Softcore characters only).

The quality of the treasure contained within the Treasure Chamber, the experience earned and the Tributes earned depend on the difficulty of the Crucible, how many waves you defeated and whether you chose to cash out or perished, with an additional treasure chest earned for successfully ending the Crucible.

Tributes are the currency of the Crucible, bestowed upon you by its cruel master as compensation for your bloody perseverance. Tributes can be spent to Restart the Crucible at various Checkpoints, or to increase your odds of survival with the aid of Celestial Blessings and Arcane Defenses.

Tribute points can be spent to create defenses around the arenas, giving the player an advantage against the seemingly endless waves of enemies. All Defenses can be upgraded twice; the first adds a new ability, the second empowers their abilities.

Tributes can also be spent to purchase Celestial Blessings, from the NPC Torralia, the Immortal Archmage.

Each Blessing provides a buff to players for  a duration of 25 minutes.

As  progress is made through the Crucible, Lokarr will introduce various Mutators to the gameplay. Mutators are global effects applied to all monsters or players, each one a unique twist that strengthens monsters/players in one way, but weakens them in another.

The Crucible begins with 0 Mutators, but up to 5 can become active at once. Every 10 waves of enemies, the Mutators are randomized.

As a way to track your successes across the Crucibles, and to compare your prowess with your friends (and adversaries), the Crucible scores your performance.

Each time you slay a monster, the score increments based on the monster slain, the wave you are on and the game difficulty. You can further magnify your score by beating the Bonus Timer.

Note: your score is only saved if claiming the reward, or dying.

At the start of each wave, a bonus timer will count down to 0. If you manage to slay all enemies before it expires, the Score Multiplier will increment by 1. This in turn magnifies all the points you earn for each subsequent enemy slain. At the end of the Crucible, you earn an extra chest based on your final score, so maintaining a high multiplier is beneficial to maximizing your loot.

However, each time the Multiplier is increased, the Bonus Timer for the next round is reduced. Maintaining the maximum multiplier of 10 is quite a feat, but it will set the true Champions of the Crucible apart from the Aspirants.

Retrieved from "https://grimdawn-archive.fandom.com/wiki/The_Crucible?oldid=27247"
Community content is available under CC-BY-SA unless otherwise noted.